Walt Disney was born in Chicago, Illinois on December 5, 1901 to Elias and Flora Call Disney. When Walt was four, the family moved to Marceline, Missouri, where Walt lived most of his childhood.

As a child, Walt enjoyed drawing, and when he was seven years old, he would draw and sell sketches to his neighbors. His uncle was a train engineer, and living near the train station, Walt worked a summer job with the railroad, selling newspapers, popcorn, and sodas to travelers.

In 1918, when the war broke, Walt attempted to enlist in the Army, because of his age; the Army denied his enlistment. He and a friend joined the Red Cross, and deployed to France, where Walt drove an ambulance for the Red Cross in support of allied troops. Walt decorated his ambulance with cartoons he drew. 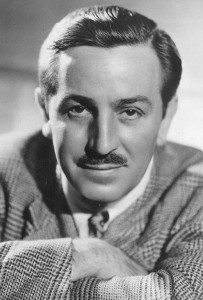 Upon returning from France in 1919, he chose to pursue a career in art and animation.
Moving to Kansas City, he partnered with another cartoonist Ubbe Iwerks to form a company called, “Iwerks-Disney Commercial Artists”. The business stagnated and the two went to work for the Kansas City Film Ad Company. While there, he found an interest in animation, and partnered with another employee, Fred Harman, to start his animation company.

The two produced short cartoons, which they called Laugh-o-grams. They secured a deal with local theatre owner Frank Newman to air their cartoons, which soon became a huge success in the Kansas City area. Soon, Walt would be able to afford a studio and hire animators and staff to produce more cartoons. Unable to successfully manage his new company, laugh-o-grams became bankrupt and Walt decided to head to Hollywood, California to establish a studio there.

He partnered with his brother Roy, and started a new studio in Roy’s garage. He sent his animated Alice Comedies to Margaret Winkler, a distributor in New York. She wrote back asking for more. From 1925 to 1927, the Alice Comedies enjoyed great success. Walt opened Disney Brother’s Studio and hired some of his old talent from Kansas City.

He soon became a recognized Hollywood figure. On July 13, 1925, Walt married one of his first employees, Lillian Bounds, whom he had hired to color and ink celluloid for his cartoons.

In 1932, the first color cartoon ‘Flowers and Trees’ won Walt the first of his studio’s Academy Awards. In 1937, he released The Old Mill, the first short subject to utilize the multi-plane camera technique. On December 21, 1937, Snow White and the Seven Dwarfs, considered one of the greatest feats of the motion picture industry, premiered at the Carthay Theater in Los Angeles. The film cost nearly $1.5 million to produce an astounding figure of that era.

Over the next five years, Walt Disney Studios completed other full-length animated classics such as Pinocchio, Fantasia, Dumbo, and Bambi.

All the while, Walt had an idea in the back of his mind to someday open an amusement park for families. A place where adults and children could enjoy a pleasant and clean environment. In 1955, this dream came true, as Disneyland Park opened in 1955 in Anaheim California. Walt also became a television pioneer beginning television production in 1954, and was among the first to present full-color programming with his Wonderful World of Color in 1961.

Walt had another dream, to create the perfect city; he called it EPCOT (Experimental Prototype Community of Tomorrow. Unfortunately, Walt would never live to see this dream fulfilled, as on December 15, 1966 at 9:30 a.m., ten days after his sixty-fifth birthday, Walt died of complications from lung cancer. He was cremated on December 17, 1966 and his ashes reside at the Forest Lawn Memorial Park in Glendale, California.

His brother continued the Florida project, naming it Walt Disney World, which opened in October of 1971.