Sir Richard Branson, is his name. He’s worth over three billion and leads a company, the easily recognized Virgin, that is composite of a number of other smaller companies that include Virgin Mobile, Virgin Records, Virgin Blue and Virgin Cola. His business tactics stray far away from tradition but with them he had a very enjoyable time becoming a billionaire, unlike most others who have broken their backs.

Branson was born 18 July 1950 in Shamly Green Surrey to a traditional, conservative family. He attended Stowe school until he was 15. Suffering from dyslexia, he was not a good student but strove in other ventures. He started a small outfit growing Christmas trees and another to raise budgerigars. They demonstrated his strive for business- diverse business in that; but both were to fail. 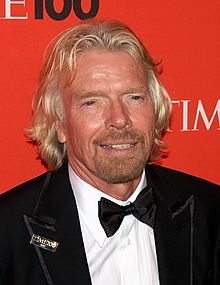 Branson’s formation of Virgin started soon after opening his own record shop in London. He had been selling cut-out records out of his car for some time before that; making enough money to open the store. The store itself was to make enough money to purchase an estate where Branson decided to open a studio. After acquiring the label Virgin, he became the owner of a small record company that helped a number of fledgling musicians that included famous Mike Oldfield. Branson’s success was in his acceptance of controversial artists that other record labels turned down. Mike Oldfield became a best seller and Virgin sponsored other controversial bands of the time like the Sex Pistols. Branson’s income rapidly grew. And grew. And grew some more.

Branson’s controversial business patters are better displayed in his public admitting of smoking cannabis; and selling it in Virgin stores if it was to become legal. He is quick to jump on any lucrative business venture. Virgin rail, and Virgin Atlantic were born from suffering rail and airway companies. With Paul Allen, Virgin Atlantic supports prospects for future paid travel in space. Branson, through his charm and charisma with the public, and his private affairs with women; he has gained rock-star status in the U.K, placing him at the #2 choice for prime minister amongst Britain’s youth.