Though Henry was brought up as any typical nineteenth century child raised on a farm he developed a mechanical interest early which swayed him from any likelihood of promoting a life similar to the one he’d known. At the young age of sixteen he left his home and moved to Detroit where he became an apprentice machinist.

After three years he returned home but his interest in the farm remained vague and his primary help was provided in the over hauling of farm equipment. During the beginning years of his marriage he supported himself and his wife by running a saw mill but by 1891, after becoming an engineer for the Edison Illumination Company, it was clear the he would dedicate his life to industrial pursuits. By 1893 he had earned a promotion 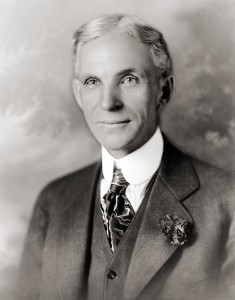 The time and money accumulated from his employee status allowed him to devote his attention toward his personal experiments. These experiments took form in 1896 when Ford developed his own self-propelled vehicle.

Though two previous attempts had failed, in 1903 the Ford Motor company was incorporated. The production of the Model t was everything he thought it should be. It was reasonably priced, reliable, and efficient but under the current conditions only a few could be made in a day.

To meet the growing demand the company opened a large factory. Within a short time he had revolutionized an assembly line and became the biggest automobile manufacture in the world.

The Ford relished in the progression of the company as well as the Model T, he was unsatisfied. He pushed to construct an automobile infrastructure. His ambitions included gas stations and better roads, which eventually led to an interstate-highway.

Ford was stubborn in his own right. He wanted everything done his own way. Though this attitude might have caused disruption it certain contributed to his success. Much like the man he admired most, Thomas Edison, Ford’s ambitions had no limit. His dreams were big and they couldn’t possibly have been achieved by anyone of less value. His stature even allowed him the progression of mass production.

He was laid to rest in 1947 but his energy and passion for the automobile industry still lives today through the minds and hearts of many other idealists. Like Ford, these idealists consistently amaze us with their advancement and unique expertise. Certainly, Henry would be proud and habit would have him initializing further technique.