William Gates the III, the former CEO of Microsoft, for short period of time, had assets worth over 100 billion dollars, making him the world’s first centibillionaire. Today his assets are half that but he remains, as he has for the past decade and then some, the world’s wealthiest man according to Forbes.

Gates was born on 28 October, 1955 in Seattle, Washington to a successful family and was able to attend a Seattle private school. His mother was a schoolteacher and his father a Seattle attorney. He developed interest in software and began programming at age 13 when the school acquired an ASR-33 teletype terminal from a mother’s rummage sale. 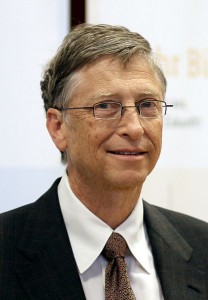 Because of their exploits of bugs in the school’s second computer: a DEC PDP-10, owned by Computer Center Corporation, Gates and a number of other students, including Paul Allen- Microsoft’s co-founder, were offered unlimited computer time in exchange for debugging the company’s computers. After CCC went out of business, the students were hired by Sciences Inc. to write a payroll program. The students were successful and were received royalties on the program.

Gates scored a close-to-perfect score of 1590 on the SAT and was accepted by Harvard. He studied pre-law but spent the majority of his time with the school’s computers. Here, he met Steve Balmer, who was to become a prominent business partner in Microsoft.

Allen, in the winter of 1974, bought a copy of Popular Electronics. Its front cover read “World’s First Microcomputer Kit to Rival Commercial Models.” The picture displayed was a familiar image of an Altair 8080. Gates and Allen understood the computer market was erupting. They contacted Micro Instrumentation and Telemetry Systems, or MITS: and lied claiming they had developed a BASIC (a programming language). MITS were intrigued but Allen and Gates hadn’t developed the code, nor had an Altair for themselves or even had touched one. They worked day and night for eight weeks writing the code for their promised computer and with a single yoke, worked perfectly in a demonstration for MITS. Gates and Allen had already dropped out of college. When MITS purchased the rights to their BASIC for the Altair, Microsoft was formed.

Gates announced in 2008 he will leave Microsoft, but will remain as a chair, to follow philanthropy. He will work extensively with the Bill and Melinda Gates foundation, that has already given 3.6 billion to global health efforts, another 2 billion to improve learning opportunities in North America, followed by about 900 million in various community projects, and annual events. In his private life, he is the father of three children and enjoys reading and playing bridge.